Dangerous or not, most people would prefer not to have any types of spiders in their homes. The best way to prevent spider infestations is to remove any possible harborage sites. Spiders are more likely to take refuge in dwellings during the colder months and will gravitate toward dark, undisturbed nooks and crannies. Therefore, homeowners should keep garages, attics and basements clean and clutter-free, avoid leaving clothing and shoes on the floor and seal off any cracks or crevices around the home from different types of spiders. 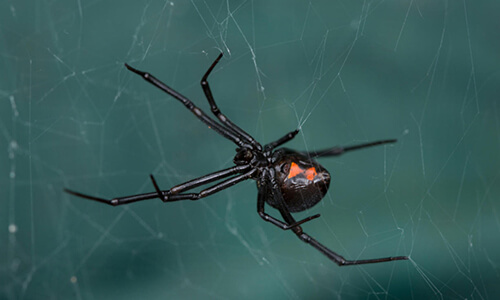 Black widows are black and shiny, with a telltale red hourglass shape on their back.

This spider species is found throughout United States, but is most common in the southern states where the temperature is warmer.

Black widow spiders are often found around woodpiles and can gain entry into a structure on firewood. They are also found under eaves, in boxes, and other areas where they are undisturbed. Black widow spiders spin their webs near ground level.

While male black widow spiders rarely bite, females are known to be aggressive and bite in defense, especially when guarding eggs. Symptoms of a black widow bite include fever, increased blood pressure, sweating and nausea. Fatalities are unlikely, as long as proper medical treatment is sought in a timely manner. Despite their notoriety, there hasn’t been a death in the U.S. due to a black widow bite in more than a decade. 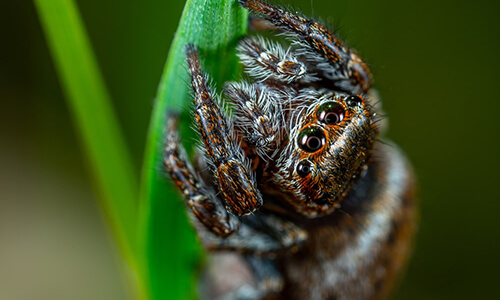 Jumping spiders are compact in shape with short legs. They are usually black in color with pale markings.

This type of spider is found throughout the United States.

Jumping spiders build web retreats, which can be found both indoors and outdoors. These spiders frequently hunt inside structures around windows and doors because more insects are attracted to these areas and their vision is best in sunlit areas. Outside, jumping spiders are commonly seen running over tree bark, under stones and boards, and on bushes, fences, decks and the outside of buildings.

Jumping spiders may bite in defense, but their bite is not poisonous.

House spiders are often yellowish-brown in color with an elongated abdomen.

House spiders are found worldwide and are common throughout the United States and Canada.

Inside structures, house spiders are most likely to be found in upper corners, under furniture, and inside closets, basements, garages and crawl spaces. Outside, they are often found spinning webs around windows and under eaves, especially near light sources that attract prey.

House spiders are nuisance pests, but post no threat to people.